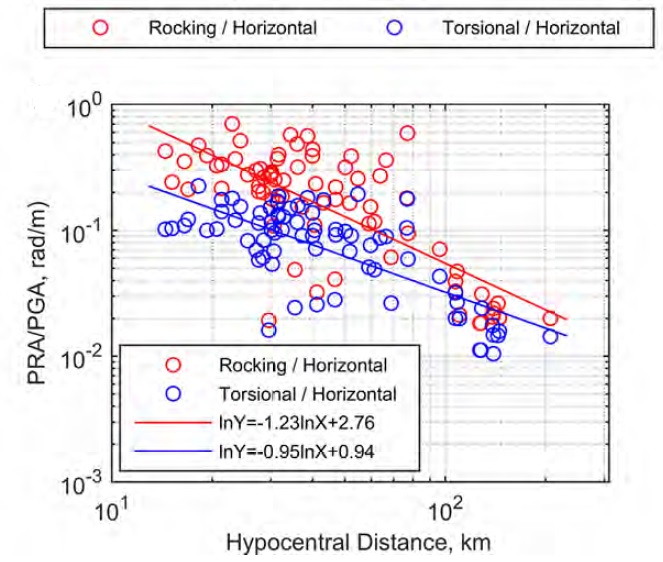 Ratios of the peak rotational acceleration to peak horizontal acceleration as a function of hypocentral distance and fitted curves for observed earthquake events recorded at GVDA.

Field-Testing of Structure on Shallow Foundation to Evaluate Soil-Structure Interaction Effects
Lisa M. Star, M. Givens, R. Nigbor, J. Stewart (2015)
A simple test structure was designed and constructed to facilitate forced- vibration testing of a shallow foundation experiencing combined base shear and moment demands. The structure consists of a reinforced concrete foundation and top slab separated by steel columns that can be configured with braces. The slabs have a 2∶1 aspect ratio in plan view to facilitate variable amount of over- turning for shaking in orthogonal directions. The structure was transported to two field sites with representative shear-wave velocities of approximately VS 1⁄4 95 m∕s and 190 m∕s. At each site, the foundation slab was cast-in-place. Forced vibration testing was conducted over a wide range of frequencies and load levels to enable the evaluation of foundation-soil stiffness and damping behavior for linear and nonlinear conditions. 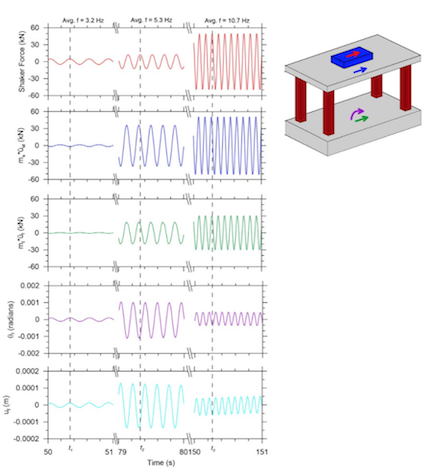 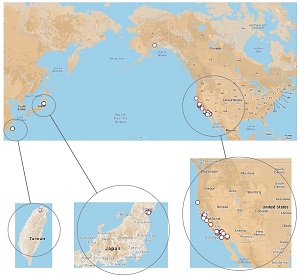 What have we learned after a decade of experiments and monitoring at the NEES@UCSB permanently instrumented field sites?
J.Steidl, F Civilini, Sandra Seale (2014 10NCEE)
New observations of pore pressure and acceleration with depth are providing in situ empirical evidence documenting the range of ground motion and dynamic strain levels at which the onset of nonlinear behavior and excess pore pressure begins, augmenting previous case history data, and cyclic tri-axial and centrifuge laboratory testing. The largest static pore pressure increases observed in the “NEES” decade of monitoring were generated by four events at the Wildlife Liquefaction Array (WLA) site, ranging in magnitude from 4.6 to 5.4 and all at distances less than 10 km from the site. The largest peak horizontal acceleration of ~325 gals was generated by a M4.9 event. This event generated ~20 kPa of excess pore pressure on multiple transducers, with a pore pressure ratio Ru of ~60% near the top of the liquefiable layer. Peak strain levels reached as high as 1.8 x 10-3. The excess pore pressure can be seen migrating from the top of the layer towards the bottom, as well as dissipation that can take hours, highlighting the importance of continuous monitoring instead of triggered. Nonlinear soil behavior is analyzed in terms of changes in travel times (decrease in shear wave velocity) between accelerometers in the array for the largest ground motions, as well as a reduction in high frequency amplification. Analysis of data during the largest excitation at the site show that the nonlinear soil behavior occurs both near the surface and even at depths greater than 30 meters. The soil is observed to recover its pre-event low-strain velocities quickly following these larger events. 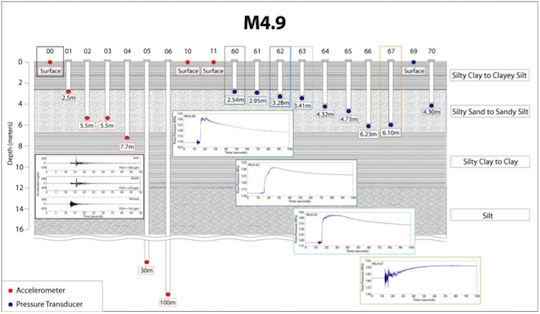 Cross-section of acceleration and pore pressure intrumentation at the WLA site. Inset images show selected data from the 27 August 2012 M4.9 earthquake and are color coded to the box surrounding the data they correspond to.

Dynamic Stiffness and Damping of a Shallow Foundation from Forced Vibration of a Field Test Structure
Tileylioglu et al. (2011)
Foundation impedance ordinates are identified from forced vibration tests conducted on a large-scale model test structure in Garner Valley, California. The structure is a steel moment frame with removable cross-bracing, a reinforced concrete roof, and a nonem- bedded square slab resting on Holocene silty sands. Low-amplitude vibration is applied across the frequency range of 5–15 Hz with a uniaxial shaker mounted on the roof slab. We describe procedures for calculating frequency-dependent foundation stiffness and damping for hori- zontal translational and rotational vibration modes. We apply the procedures to test data obtained with the structure in its braced and unbraced configurations. Experimental stiffness ordinates exhibit negligible frequency dependence in translation but significant reductions with frequency in rotation. Damping increases strongly with frequency, is stronger in translation than in rocking, and demonstrates contributions from both radiation and hysteretic sources. The impedance ordinates are generally consistent with numerical models for a surface foundation on a half-space, providing that soil moduli are modestly increased from free-field values to account for structural weight, and hysteretic soil damping is considered. 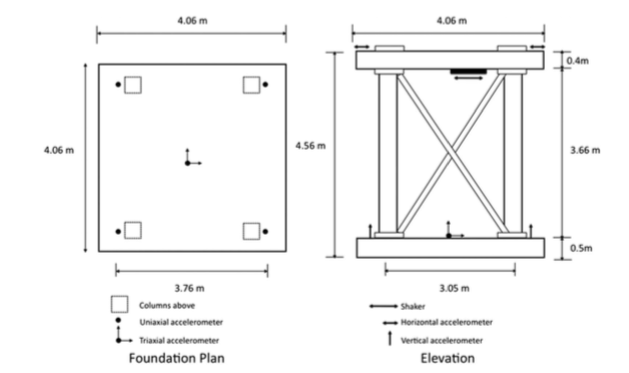 Plan and elevation views of the SFSI test structure at GVDA showing locations of instrumentation and shaker.

Characterization of Environmental Variability in Identified Dynamic Properties of a Soil-Foundation-Structure System
Asghari, A. (2009)
A dissertation presented to the Faculty of the Viterbi School of Engineering, University of Southern California. 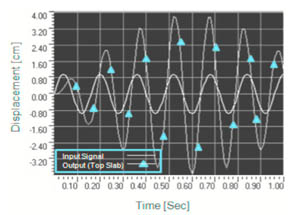 FEM simulation of slab displacement due to a sinusoidal harmonic input at resonance frequency (10 Hz). The response of theslab is amplified (relative to the input function) due to the fact that the applied force’s frequency matches the structure’sfirst frequency. 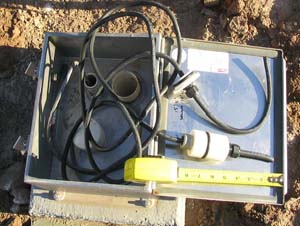 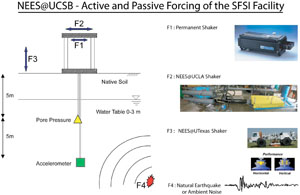 A schematic of the structure constructed at the GVDA site and the different input forces that can be used in response testing. 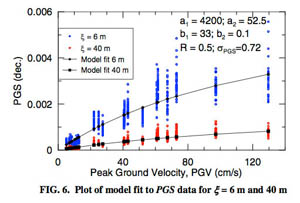 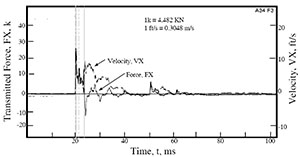 This site previously funded 2015 to 2017 by the NRC Contract#NRC-HQ-60-15-C-000, project title "Observations and Analysis of Geotechnical Data". And 2004 to 2014 by the Geoge E. Brown, Jr. Network for Earthquake Engineering Simulation (NEES) Program of the National Earthquake Hazards Reduction Program (NEHRP) of the National Science Foundation (NSF) under Award# CMMI-0927178.